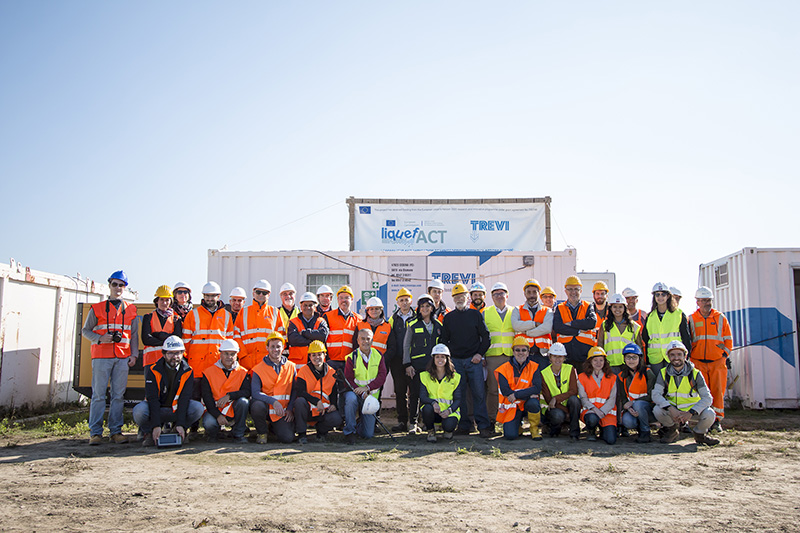 Between 30/05/18 and 31/08/2018 all activities related to the installation of horizontal patented well screens with high porosity in the middle of the liquefiable layer were carried out by TREVI for both chosen liquefaction mitigation techniques, Horizontal Drains (HD) and Induced Partial Saturation (IPS)

For the HD technique 7 well screens were installed according to two different meshes. The adopted sequence had 3 steps:

A total amount of 576 m of welded polyethylene pipes was set in place with an overall industrial production rate of 5 m/h.

A total amount of 312 m of welded polyethylene pipes was set in place with an overall industrial production rate of 6 m/h.

The high precision achieved allowed to obtain an average deviation from the theoretical position equal to 0.33%. The chosen operational sequences and methods were aimed at minimizing alteration of the ground natural state, so that reamers with a diameter exceeding well screens’ diameter by about 10% were built up, and a very light (1.25 kg/m³) natural biodegradable polymer slurry was adopted as drilling fluid.

Such an effort required the use of a SOILMEC SM-18 drilling rig, plus ancillary equipment:

The Jobsite Organization Chart has included the on-site presence of:

Moreover, welders and others employers from the warehouse were involved.

In order to be able to monitor the execution of a full scale earthquake simulation, several devices to measure the built-up of pore water pressure during the dynamic testing have been installed. In detail installation of nos. 9 geophones and nos. 15 pore pressure transducers was carried out.

In order to test all the air blowing systems arranged to flush through IPS well screens, a preliminary blowing test was carried out on July 23 and 24. A pressured vessel of 2.000 l at 10 bar was capable of blowing air for 250 l/min along 4 pipes. Each line was connected to a 10 m dissected area of the well screens and, thanks to four manometers and a regulation valve, it was possible to achieve a flow adjustment sensibility equal to 0.01 bar.

In order to check the actual desaturation of the blown-up zone, a total amount of 12 tests was carried out:

Any cookies that may not be particularly necessary for the website to function and is used specifically to collect user personal data via analytics, ads, other embedded contents are termed as non-necessary cookies. It is mandatory to procure user consent prior to running these cookies on your website.